05. August 2021
The results published by ADAC on August 5, 2021 impressively confirm the performance of CarEye® Safety Angle. The blind-spot assistant from EYYES was able to convince in this comparative test with the best rating!

In the ADAC test for blind-spot assistance systems, the CarEye® Safety Angle from EYYES (aka “TASET001”) clearly prevailed over the strong competition. With its two high-resolution cameras and powerful AI on board, the retrofit system catapulted to the top of the international manufacturer field.

The CarEye® Safety Angles, or “CSA” for short, detects pedestrians and cyclists in a significantly extended detection range of up to 40m2 and warns unerringly of impending collisions – and only then! The ADAC test also clearly shows how important it is for drivers’ confidence that the system minimizes false alarms, such as those caused by static objects on the side of the road.

This is made possible by the control unit developed in-house at EYYES, called the TIC box. Its high-performance artificial intelligence (AI) based on neural networks identifies other road users and distinguishes them unerringly from static objects. It determines their future course of movement and simultaneously monitors the movement of its own vehicle. Based on this data, the CarEye® Safety Angle warns the driver only of real threats and not of all objects or road users in the detection area. This reduces annoying false alarms and saves drivers a lot of trouble!

The close-range camera allows a view and detection range of up to 6 meters to the side, while the second rear-facing camera covers the area to the side of the vehicle to the rear, so that there are virtually no blind spots any more.

At the same time, the test demonstrates the technological superiority of the optically based system, whose high-resolution sensor technology can unerringly detect and distinguish objects in a significantly larger monitoring area.

All info about the product

EYYES (formerly AVI Systems), headquartered in Gedersdorf near Krems, is a pioneer in the field of customized hardware and software developments of highly secure systems for traffic and industry. From simulation, prototype phase to serial production – the EYYES research and development team is the guarantor for flexible and perfect Safe Artificial Intelligence solutions. Founded in 2013, the company operates at three locations in Austria (Krems) and Germany (Aachen and Freital) with a total of more than 30 employees. For the intelligent, functionally safe sensor solutions for highly technical mobility and industrial solutions, EYYES cooperates with top international research institutes such as AIT, Software Competence Center Hagenberg and Fraunhofer Institute.

Photos and other visual material

All images can be downloaded. The copyright for the content of the photo archive is held by EYYES GmbH, Krems or the authors listed. All rights are reserved. The contents of the photo archive such as images, audio and video clips may not be modified, but may be downloaded for media purposes and exclusively private use. For any commercial use, prior written permission from EYYES GmbH is required. For commercial use, please contact the press department of EYYES GmbH (see press contact). By downloading and using the images and other materials, the user automatically accepts the above conditions.

Career
We are hiring

You can find out which cookies we use or turn them off in the Settings. 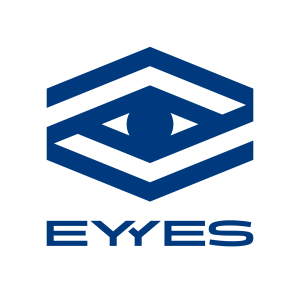 This website uses cookies so that we can provide you with the best possible user experience. Cookie information is stored in your browser and performs functions such as recognising you when you return to our website and helps our team understand which sections of the website are most interesting and useful to you.

If you deactivate this cookie, we cannot save the settings. This means that each time you visit this website, you will have to enable or deactivate the cookies again.

This website uses Google Analytics to collect anonymous information such as the number of visitors to the website and the most popular pages.

Please activate the essential cookies first so that we can save your settings!